Very soon we will see the release of ‘For the Empire‘, the first pack of the Inheritance Cycle. One of the stated goals of this cycle is to bolster the importance of both the Bushi and Courtier traits to make them more distinct. And who better to explore the power of being a Courtier than the Crane Clan? Lets take a look at some new cards the Left Hand of the Emperor will be receiving to demonstrate their mastery of the courts! 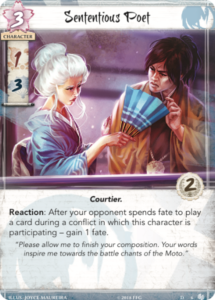 Courtiers are, essentially, masters of leveraging resources. Sententious Poet demonstrates that by creating an economic advantage over her opponent. Her stat line alone is very solid, the 2 glory being especially valuable in a clan that can easily create honor status tokens. But most competitive card game players will tell you that the ability to generate economy is the cornerstone of building an efficient deck. The longer Sententious Poet remains in play and in a conflict, the greater her value becomes. It does not matter they type of card played (Event, character, attachment) or even the type of conflict she is in, simply being present will make your opponent think twice about what they are trying to buy. Since her ability works no matter if she is bowed or not, she can even be moved in to conflicts while bowed with cards like Favorable Ground or Formal Invitation to attempt to trigger her reaction. Her ability may not be unlimited, but she is not unique, making it possible to field multiple copies at once for multiple triggers! 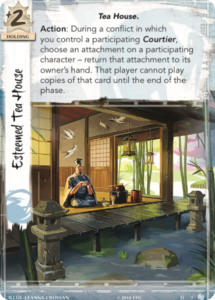 Attachment control is one of the most important aspects of competitive decks, so strong that it has cemented Dragon as the default splash for most decks do to the very effective cards, Let Go. With Esteemed Tea House, Crane gain access to potent attachment control of their own and with it the ability to explore other clans as potential splash options. As a holding, Esteemed Tea House occupies a unique spot in the attachment control meta. It is not an event so it cannot be countered by cards like Censure or Defend Your Honor, and it is not a character than can be shut down with Cloud the Mind. You do have to wait for it to flip up in your dynasty, occupying a space for potential characters, but keeping it around allows you to us its ability over and over again each round. With the sudden influx of powerful holding Crane has been getting lately it is wise to invest in cards that manipulate the dynasty flip, such as Daidoji Nerishma, but it feels good to be burdened with so many options. As long as our opponents avoid talking to peasants, we should be fine.